We are seeking success
driven individuals to join
our team in the St. Louis, Mo
and Florida panhandle.
Read more →

Challenges of Working from Home

If you haven’t read our other articles about customer satisfaction surveys, you may want to also read:

However, in this article, we focus on an area that even the Forbes article stressed on — preventing bias — about analyzing the survey data and interpreting survey results.

Why is interpreting survey data without bias important?

A paper published on the website of Berkley University identifies many factors that result in bias while interpreting and using research results. Two of these are:

It would be wrong to state that bias only exists in analysis of research findings. Bias finds its way at every stage: selection of survey sample, defining the demographics, selection of the survey method, etc. However, even if all of these were objective and devoid of bias, the entire survey could prove to be futile if bias is not eliminated from its analysis and interpretation. 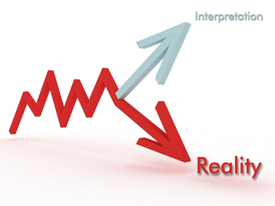 Every business that invests the time and effort in customer satisfaction has the best of intentions –to ensure customer delight, take corrective measures to maximize customer retention, deliver the value customers expect, innovate and offer new products and services.

However, most businesses expect to find some information or data to back their assumptions and beliefs. Instead of approaching customer satisfaction surveys as a means to finding what customers want, many businesses make the mistake of using this as a way of justifying actions and decisions they want to make.

This often results in a bias while analyzing and interpreting the survey results. When decisions based on biased interpretation prove to be ineffective, the tendency is to question the effectiveness of customer satisfaction surveys as a channel and this fuels a distrust in future decisions based on the findings of surveys and market research.

How to eliminate bias while interpreting survey data?

If you have completed your survey, gathered the data and are now worried about bias, it’s already too late. Eliminating bias in analysis should start while planning the survey. While designing the survey, if measures are not taken to protect research findings from biased interpretation, it is difficult to remove it during interpretation.

Here are some things to address in order to expel research bias:

This is an article by a customer satisfaction company about eliminating bias in surveys. So how can this not be a biased article?

We do not deny the bias in this article. However, we do strongly believe that you need to remove bias from your surveys in order to get the most out of them. Outsourcing the survey to an outside industry service provider will help eliminate the bias.